So you're prepared and Papa wishes you all da best

Yesterday Marvell asked me if he could play with his computer games, I asked him shouldn't he be preparing for his UPSR exam instead, cheekily he said,"No worries,Papa, I am all prepared" and I reiterated that he should in fact be preparing for his exam but I bet that he knew that I would let him just do it.

Again he asked me not to worry about his exam and I relented and told him to go ahead and enjoy himself.... in fact I have this standard practice for my sons that they should not be "studying" a day or two before their exam, they should just hang loose. 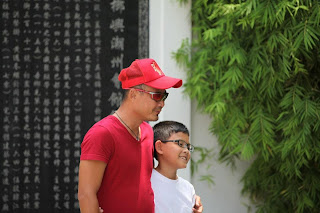 I have this mutual "respect" with my boys,to certain extend,I respect them for wanting to make their own choices but sometimes I would punctuate in between their choices that they should learn to be responsible with the choices they made.

They understood that their parent would never tell them that they should score how many As but they are always encouraged to do their best and as far as my boys are concerned,I guess they have learned to 'draw the lines' and I am blessed.