I was having lunch with my family and my good friend together with his son, who happens to be Jovial's school mate of the same form.

As I was asking casually about my friend's son's result of Ad Math, he told me bad, so I was telling him that Jovial was not doing that well either but what Jovial shared with his friend after that really warmed me up and he said something like this.

"If we continue to practice and practice, we will be doing better" ..so nice to hear this from my son.

And now back to Marvel my lil one, last night he passed me his so called UPSR trial exam result and it was a straight As for him, I gave him a hug and congratulated him on a job well done.

I am very blessed to have these two wonderful boys, the thing about them is about their tenacity, you see my two boys declined my offer of providing them the extra tuition classes (right up till now though), they prefer to study on their own,even though  at one time,Jovial's result was kind of a dismay but he managed to better himself later.

I have always wanted my boys to learn how to get up when they fall, how to be responsible for their own actions,be it good or bad, most important thing I have always told them to be compassionate, to be kind and to be generous to others. 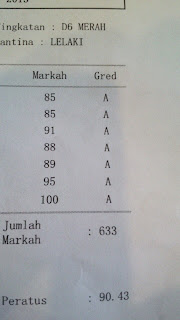 My prayer for my boys will always be,grow up to be a nice man, a man with good heart.