When I got back from work yesterday and when I was ready to put on my running gears,suddenly my lil Marvell asked me this question,"Papa, what would you do when you are stressed out?" I said running was one of my remedies, he pursued in asking me further what else would I do when stressed, I said I would pray if I was stressed out.

Sensing something was amiss,I asked him why did he ask what he asked,then he told me that he was under stress for today would be the beginning of his UPSR trial exam,quickly I gave him a hug, telling him that it was okay and I would always love him no matter how he fared in his exam.

I was so surprised at his age of 12, telling me that he was stressed out due to a UPSR trial exam, how can it be?

You see Marvell has always been a very positive,cheerful and tenacious boy but hearing from him yesterday, I knew that he was indeed "stressed" ..

Before Marvell went to sleep,I held him tight to my arm and told him that papa would like to pray for him,asking the good Lord to grant him a peaceful sleep and we both said Amen.........

So I guess instead of asking him how did he do in his exam today, I would ask him,did he enjoy the exam when I pick him up later in the afternoon,I guess that would sound better? 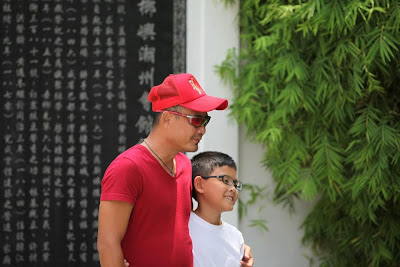