This must be the most painful feeling 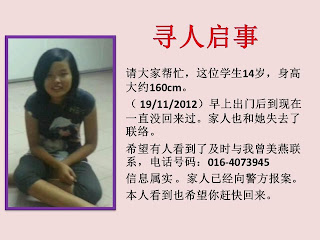 I was surfing my Facebook, I stumbled upon the above posting by one of Jovial's friends on his FB,I read through the message and I said I needed to see if it was a genuine case so I called the number as shown and spoke to a 曾美燕.

Indeed this 曾美燕 was the missing girl's mother, she sounded so "helpless",I introduced myself and she was kind of overjoyed as if I was the one who was going to bring her the good news that 'I have found your girl" but it was not that case and then she just could not talk anymore and she passed the phone to her sister.

I said to her sister that I could understand the mother's feeling for I am a parent too and she told me that police report had been lodged and they were hoping that "someone out there" could help them to find the girl.

I could only pray that this girl would be found soon by "someone out there" and I do hope to those boys and girls who sometimes would go "missing" under protest just to "prove" to their parents that they are capable of  " missing", please don't do that for you will never understand the torment, he helplessness and stress your parents have to go through.