This one is for you bro.

I have never done this in my entire 46 years of my life but this year's birthday of mine,it was special,special in the sense that I managed to invite a dear friend of mine together with his family for my birthday dinner,initially,he did not know that it was my birthday.........so the story goes.

So I called him up two weeks ago inviting him and his family for a nice family dinner at one restaurant on the 26th of October,he agreed but he said he would like to foot half of the bill, I insisted that it was going to be my treat for him and his family.

I have known this friend roughly about 10 years or so,there was no friendship involved,it was only business dealing until one day few months back

For a few times he saw me running in Botanical Garden, we could only waved at each other,(cos I no talk to nobody when I am running,hahahahah) so one day he called me up  and he asked me soemthing about the mp3 that I was using while running and from then on, I knew I have found a friend of which I should have made him one many years ago.

We have many things in common, we love running, we love our families, we love God, we came from the same school( he is 4 years my junior), we reciprocate our friendship by mutual understanding and respect,(I even asked him if I could put this post up, thank God he said okay)

The best part of our new found friendship is,Jeffery(that's his name) would call me up when he feels that he wants to share something with me,he had never failed to call me back if he missed answering my phone and I  surely do likewise.
We could tell that you have found a good friend, when he has no "motives" at all, no insurance proposal, no MLM invitation, no "kang tau" involved and this will last..

I must admit I have many many friends but rarely I have friends that could match Jeffrey, I know from the bottom of heart that this friend I am going to keep. 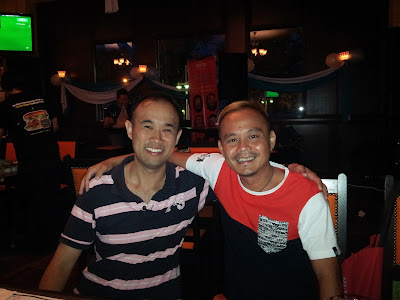 Note : Bro.please say "thank you " to your wife for the cake, I never intended to let her 破费的 but I cant be lying to you until the end of the dinner, can I?

P/S : Serendipity at its Best

Posted by Unknown at 6:30 AM
happy child good friend