I was talking with some friends while waiting to pick Jovial up from school last week, I saw a church friend cruising passed me, he did not take notice of me at first, so I thought he would have driven off. Then from far, I saw him making a same round again, he was driving so slowly, by then. 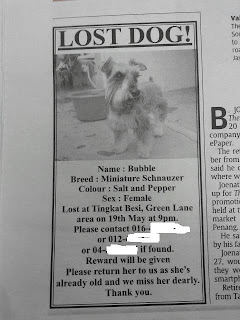 By then, I walked towards him and he stopped, I greeted him and then when I took a look at him, I could sense that he was looking so sad and furrows appeared on his cringed face, I said," Hey Victor, you don't look too good? what happened?" He still sounded sad and said he had just lost his dog.

Frankly speaking, I could sense his despair because once my dog Miko died, it was such a feeling of loss and despair too..After a brief exchange of conversation, I asked how could I help because Jovial school was near to his house where his dog has gone missing.

He then passed me some A4 size notice of "lost dog" the one above, I said to him, I would ask around later...

Armed with the A4 sized notice of 'lost dog" I showed to some friends and it was rather disturbing when almost all of them acted disdainfully as if," I don't have time for this lost dog lah" "who cares about a lost dog ? " and some even  ask about how much the owner would pay, if RM50,found also lazy to give back lah kind of comments.

Now I am wondering, do you think if my friend were to put up a notice such like this, "if found a reward of RM1000 would be given" would this make a difference than this notice of plainly" Reward will be given' ?