The conclusion is..they are both my wonderful boys

Last night, I was giving "lectures" to Jovial (my first born) I was not happy with certain things about him, so the lectures were inevitable...The few things I've learned when dealing with teens when lecturing,particularly during those rebellious age are 1) lectures should not be too long..done with it,just walk away... 2) Don't tell them 'our old times' story...3) Tell them that you are just a human,having feelings too.

When I was done with Jovial, I went into the master room, there we were another son of mine Marvell and my lovely wife, as I was lying on the bed, I was sharing my frustrations, my anger and my heartaches being a father to Marvell.

I was then telling him this, " Marvell, I know may be when you get to Keke (brother) age, you might be kind of rebellious too, if you do,I think I can understand." Then Marvell was quick to say that he would not, jokingly I said to him that don't say it too early....What he did after this was kind of amusing.

He quickly grabbed his mother's Samsung Note and wrote the following pledge, with picture and confirmed it with his signature...............Can you guys catch the gist of Marvell's pledge................. he says that he won't be excessively rebellious. but he reserves the right to be mildly or subtly rebellious ,,,,,hahahahhahahaah 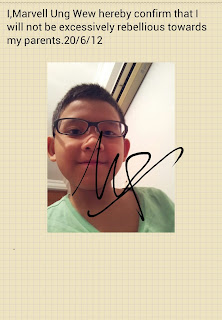