Yesterday when I got back home from work, even before I could get changed,Jovial suddenly said this to me," Papa, please keep these condoms ?" I was like shocked to hear that.

I said where,then he showed me those condoms spread on the dining table (which he took out from a shopping bag),okay now. Actually those condoms plus one or two massage gels were some of the stuffs from a goodie bag which I got from my weekend's shopping.

Actually, I didn't bother to keep them,so I left them as where they were but when I had the time to keep them, I realized that those massage gels are meant for ladies, which has some reading that goes something like this, "sweet orgasm", sensual stimulation and those sexy and kinky wordings, when I saw those words,I quickly picked them up and stored them away.

The reason for my swift action was that I was not ready to tell him about what "orgasm" or sensual stimulation were. I have told my boys about condoms and what not but the deeper side of sex, not ready lah.

Have a great weekend guys and god bless. Now if he reads my blog, probably I sit him down and share lah,,, 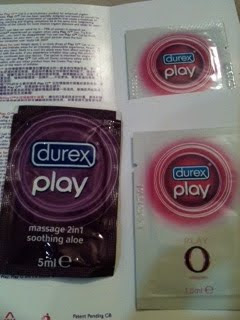 P/S : Everything happens for a reason,may be two or even a handful.