I attended a musical concert organised by my son's after school care kindy last friday, i always hate to go to such kiddy kind of concerts, not because i loathe the performances of the children, in contrary i feel the children's performance are superb, but the only thing i hate so much being there is because of the "PERFORMANCE" of adults.

My yongest son was tasked the role of MC, naturally my wife and i would have to be there to give him some support. 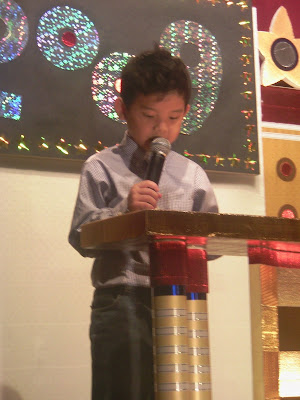 The Late Show with Marvell Ung Wew. My youngest taking the mike as a MC

During the performances throughout the concert, the ugliness of the adults can be manifested and be seen through their selfishness. My wife and i were standing at the aisle at the entrance, i saw 4 empty seats, with two elderly aunties seated amongst the empty seats, and funnily there were the programmes pamphlet strewn on top of the empty seats, i waited for 40 minutes, no one came to occupy the empty seats, so happily i sauntered and rested myself in one of those seats, then suddenly one auntie raised her voice at me. " This seat is occupied already one" angrily i looked at her and told her if it was occupied, how can i be seating on it"

To save the show, i geekly looked at her and meekly saying this to her " you are a selfish lot" then i walked back and took my standing position once again.

During the concert,one can easily see the insensitiveness of oneself. The parents who were so oblivious to others audience or parents were seen standing up from their seats, snapping away with the full body view blocking the views of audience seated behind them.

During the concert, the more boisterious ones were not from the children, but from the adults, they failed to understand that they were in the concert, and they should enjoy the performances of the children, instead of chatting away with others talking this and that, and worst still, they didnt even know how to keep their voices low.

Some parents were even seen playing selective applause, they only clap when their children are performing, and the same zealousness was not awarded to other children.