Very proud of you son 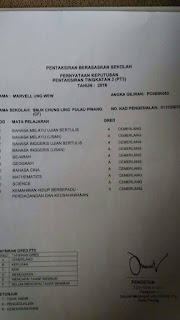 Suddenly missing him much

It has been a week since Marvell has "relocated" to Singapore and thank God for technology that we are able to stay connected via Facebook and whatsapp.

This is also the very first time that Marvell has stayed away for a long time from home and I have already begun to miss him much, miss his cheekiness, miss his "merepek", miss his hugs and miss his saying of " Love You"

I guess the time has come for my boys Jovial and Marvell to spread their own wings and fly.........as parent, I can only hope and pray for the best for them,pray for their safety, pray for their health and also pray for all happiness for them. 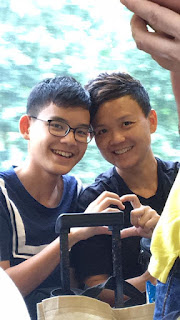 This year June, my lil son without informing us sat for one particular exam which was run my NUS High school Singapore that so called recruit those they consider "good" to be given full scholarship to study in that college.

Tomorrow, he will be flying down to Singapore with my lovely wife and stay there for a two weeks for the" bridging course"   wifey would only accompany him for a few days, the rest he just has to be on his own.

I just realized how time really flew by and before you knew it, the children are all grown up, they would spread their wings and fly. 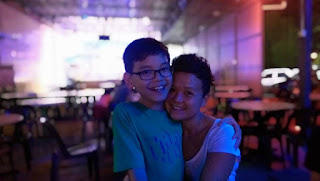 I sincerely pray that the good Lord will keep him safe and healthy throughout these 4 years or may be beyond and he will emerge as a good man and be someone to would to good to not only himself but to the society as well,

Jovial didn't do quite well in his SPM, (that's what he conceded), a few As and string of B+ to me is all right but I know he was kind of disappointed at it.

Unofficial post mortem was done, he recognized his short comings and mistakes and I asked him if he wanted to pick a course and enroll into a college, he declined. He said he wanted to strut it out again through six forms.

I could see the tenacity in him and the seriousness in him in his study, I don't have to remind me to study,like what I did during his form 5 year, this I am happy for him, the attitude side of it is important.

He feels the pressure and for the first time in his schooling years, he asked for extra tuition classes which we gladly agreed.

I just pray that he will stay healthy and do all that he knows best as far as books and exams are concerned.

Indeed it has been this long

To my fellow bloggers friends, I am sorry that I have not been able to visit your blogs to read and pen down comments.

I didn't really realize that it has indeed been this long since my last post, life indeed has been a little hard with my business not doing too well but thank God it is still manageable,.

Looking back I still miss those blogging time,where I can pen down my thoughts, giving comments to others'.

Ok, I think it will be nice if I continue with blogging in a way it helps to distress too.

On the same evening, in spite of my worries, I agreed to let him drive me and my wife back from his workshop for the first time on this day 14th, February 2015.

I felt indeed relieved that Jovial handled his driving pretty all right for the very first time, despite on or two scares...........

Of first paycheck and RM50

Yesterday Jovial was kind of happy and when he told me this, "papa, I have got my salary already" and asked him, so what was he gonna do about the first paycheck of RM780.00, he kept mum for a while.

Just when we were about to take our dinner, he took out two RM50.00 notes, he handed me one and his mother another one and he said he wanted to keep the rest.

I asked him why did he want to keep his money, he said he wanted to save then asked me if I could teach him something about investment.

I felt happy for him and proud of him because his intention of getting his paycheck was not to lavish on changing to a new hand phone or buying some new stuff but instead he wanted to keep it.

I guess he is different...

Soon after his SPM exam, Jovial said he wanted to "chill and relax" for a short stint, he went travel a bit with his friends, then rested for a few days at home.

So when I casually asked him if he wanted to work part time, may be as a waiter or shop assistant like many of his friends, he said no. After hearing this, I thought he just wanted to continue to "chill and relax" until his result comes out.

Lo and behold, one day, he asked me if he could work as a car mechanic in my friend's workshop, I was stunned, I told him if he worked as a waiter, probably he could get some income like 900 to 1200 ringgit per month but he said that job would not let him learn some life skill.

Now he is into his third week working as a car mechanic, getting himself dirty, going under the car body, wrenching off the tires, changing lubricants, getting some scolding from my friends, learning to deal with "difficult" customers.

When I was asked by my friends what Jovial was working as he waits for his result, I told them "foreman", they said, my said was "different"..

P/S : Indeed he is different..

It is funny how sometimes there are friends who are envious of me, I don't drive big cars, I don't stay in big bungalow and I don't wear branded suits, all I have is a great wife, two wonderful sons and some money in the bank, that's all and not forgetting I do have a great God.

Friends sometimes tell me, "you good lah, sons so well nurtured, wife earning well, you too business okay" at times listening what they say, it gives me the feeling that their compliments are tinged with envy and a bit of jealousy.

Looking back, I am indeed blessed,to sum it all up..thank God for the blessing